Home » Behind the Headlines » Are We at New Peak Construction Spending?

Are We at New Peak Construction Spending?

Total construction spending peaked in Q1 2006 at an annual rate of $1,222 billion. For the most recent three months it has averaged $1,172 billion. It is currently at a 10 1/2 year high at just 4% below peak spending.  But that ignores inflation.

In constant inflation adjusted dollars spending is still 18% below the Q1 2006 peak. 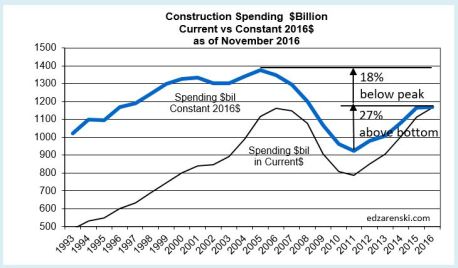 Current headlines express exuberance that we are now at a 10 1/2 year high in construction spending but fail to address the fact that is comparing dollars that are not adjusted for inflation.

In the 1st quarter of 2006 total spending peaked at a annual rate of $1.2 billion and for the year 2006 spending totaled $1,167 billion. We are within a stone’s throw of reaching that monthly level and 2016 will reach a new all-time high total spending by a slim fraction. But all of that is measured in current dollars, dollars at the value of worth within that year, ignoring inflation.

Adjusting for inflation gives us a much different value. Inflation adjusted dollars are referred to as constant dollars or dollars all compared or measured in value in terms of the year to which we choose to compare. To be fair, we must now compare all backdated years of construction to constant dollars in 2016. What would those previous years be worth if they were valued in 2016 dollars?

Residential construction spending is still 32% below the 2006 peak of $690 billion. In constant inflation adjusted dollars it is 39% below 2006 peak.