It’s not uncommon that clients ask for a forecast of construction spending for the next three years. It is less common that forecasters explain the reliability of the data in a forecast.

To predict the reliability of the data in a forecast, several assumptions must be stated.

Cash flow curves are generated to predict the spending pattern. These are assumed to be reliable. The cash flows are generated from monthly data releases for New Construction Starts. The Starts data is assumed reliable. However, major sector data is revised in the following month and again in the same month the following year. These revisions are incorporated when released, but nonresidential building markets revisions are not posted at the same frequency. That data becomes available in the 4th quarter report of the following year. It is updated at that time. The analytical methods are assumed to be reliable.

The primary driver of the spending forecast is New Construction Starts. Care must be taken to use Starts properly. Starts are sometimes misinterpreted in common industry forecasting articles. Starts dollar values represent a survey of about 50% to 70% of industry activity and that varies by market type, therefore Starts dollar values cannot ever be used directly to indicate the volume of spending. Also, Starts do not directly indicate changes in spending per month or per year. Projected starts data cannot be used to directly forecast expected construction volume. Only by including an expected duration for all Starts and producing a forecast Cash Flow from Starts data can the expected pattern of future backlog and spending be developed.

For short duration residential spending, single-family residential and renovations work, approximately 75% of the spending occurs in the current year and 20% in the following year.

For long duration residential spending, typical of multifamily residential, approximately 50%-55% of the spending occurs in the current year, 35%-40% in the next year and only 5%-10% occurs two years out.

For nonresidential buildings spending long duration jobs can sometimes have a 5 to 6-year schedule. On average most years have at least some projects start that will be under construction for 4 years. For an entire year’s worth of starts, approximately 20% of the spending occurs in the year started, 50% in the next year, 25% in the third year and only 5% in the fourth year or later year. This also means that nonresidential spending growth in 2019 is still being affected by starts from 2016.

Non-building Infrastructure spending has many of the longest duration jobs. Some job starts in the last two years have 6 to 8-year duration. Many years have at least some projects start that will be under construction for 5 years. For the entire year of starts, approximately 15% of the spending occurs in the year started, 40% in the next year, 33% in the third year and 12% in the fourth year or later year. This also means that non-building Infrastructure spending growth in 2019 is still being affected by jobs that started in 2015.

For any future forecast month, the most information is in hand the month before. For example, in the month of October the forecast for November includes a projected cash flow which is based 96%-98% on actual projects. Only the small amount from new projects that start in November is predicted. Assessing the amount of actual data versus the amount of predicted data gives an indication of how much weight can be placed on the forecast. Obviously, the balance of actual versus predicted data changes the further out in time we view the forecast. 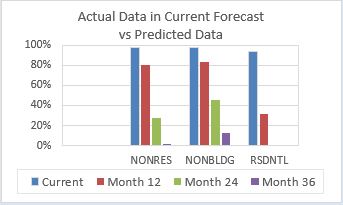 From the current date, the forecast for the next month includes 95%-98% actual data. Only the cash flow curve and the predicted duration affects the reliability of the forecasts and even that is minor.

Three years out from the current date the reliability of the forecast is dependent on the economic outlook of the developer and the predictive methodology of the analytic tools.

It’s good to know, when you are looking at a forecast that projects three years out past the current year, there is nearly no actual data in that forecast. It’s all predicted.

By edzarenski in Backlog, Forecast, Starts on October 2, 2018.
← Behind The Headlines – Construction Starts is Not Spending My Constructech TV Interview →