Infrastructure work does not normally grow in leaps and bounds.

Currently at about $300 billion a year, infrastructure represents only about 25% of all construction spending. The infrastructure sector is comprised of the longest duration type projects such as energy, highway/bridge, transportation terminals, railway and water/waste water resource development. It is not unusual for projects to take four to five years to reach completion.

Although new infrastructure starts were down in 2016 and are expected to decline again in 2017, the amount of work in backlog at the start of 2017 is the highest its ever been and spending in 2017 is forecast near the all-time (2015) high. Spending in 2018 from backlog will increase again and 2018 will hit another all-time high. There are no annual declines in spending predicted for the next four years. Some very large public infrastructure projects that started in 2014, 2015 and 2016 still contribute large amounts to spending in 2017 and well into 2018.

Increasing infrastructure spending by $10 billion a year would require adding about 35,000 to 40,000 new construction jobs per year. To accommodate all growth since the recession bottom, this sector averaged adding only 20,000 new jobs per year. Current spending growth is predicted to add $40 billion in work over the next three years and this will absorb all new heavy engineering jobs growth. The non-building infrastructure sector does not have the capacity at this time to increase spending by another $10 billion/year over its current growth rate, nor does it have the capacity to add an additional 40,000 jobs per year.

This summary of current projected spending does not include any future infrastructure work that might be generated from a proposed $1 trillion spending plan. 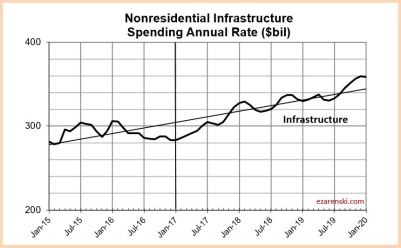 Public spending is not all public works projects. 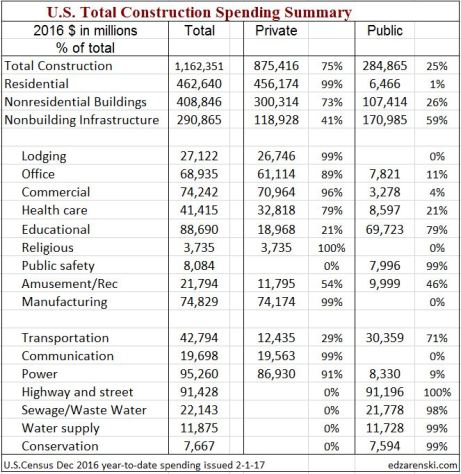 Highway/bridge work fluctuates the most with large monthly swings up or down. However, 4 out of 5 times over the last 12 years, any large monthly move up or down was accompanied by a partially offsetting opposite move the following month. Highway spending hit an all-time high in 2015 and again in 2016.

Any increase to future work needs to be considered as over and above the spending growth patterns already due to work in backlog and new starts anticipated. This plot of predicted public spending does not include any future infrastructure work that might be generated from a proposed $1 trillion spending plan. About 80% of all spending in 2017 is already in backlog. About 50% of all the spending from Jan. 2018 through Jan. 2020 will already be in backlog by Jan. 2018. 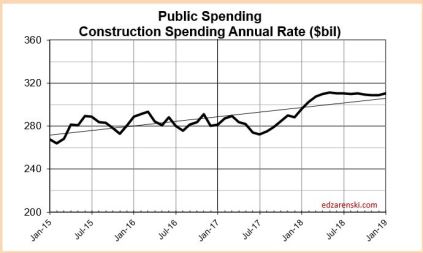