6-26-20   April construction spending dropped only 3%, but jobs+hours worked dropped 16%. Even though May showed a partial jobs rebound, jobs during this period are still down much more than spending. If this data is accurate, we dropped about half a million jobs more than then the decline in spending would indicate. If so, it’s time to wake up and accept there has been no labor shortage, but rather there has been a huge excess of nonproductive labor.

We’ve seen in the past that jobs can grow in excess of volume growth, but we’ve never seen a period where jobs show a massive decline without a like decline in spending. If it is true that jobs declined without an equal drop in spending activity, then those jobs were nonproductive.

Is the industry about to reset jobs vs work volume? Or, should we expect revisions to the reported data? With the July 1 release of spending data, all monthly (not seasonally adjusted) spending gets revised back to Jan 2018. We’ll see if Mar-Apr gets revised to show larger spending losses.

This post will be expanded after the July 1 construction spending and jobs releases.

Data on recent Construction Starts for May from June 15 release

The 3 month decline in spending for Mar-Apr-May 2020 is now reported at only 6%. There is still some disparity in the spending data (vs jobs) in 2020 that is subject to several more revisions and may not get revised for at least a year. 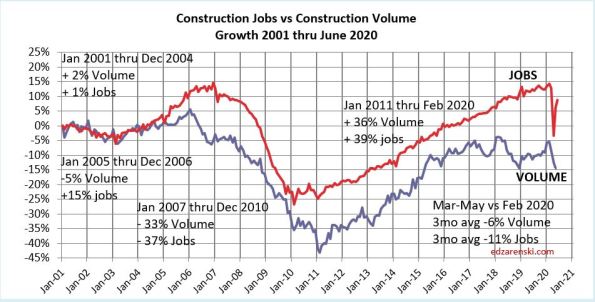 Construction Projects that shut down in Mar-Apr-May did not post lost revenues as deep as predicted. Spending was down only -4% from February to April.  In May the decline from February reached -6%. Compared to February, Residential spending for May declined -9.5%, Nonresidential Buildings -5% and Non-building Infrastructure declined only -2%.

The data for Mar-Apr-May 2020 shows that the spending drop from shut down delays was far less than anticipated. More than 90% of all work continued unabated through April and May. The result is fewer reductions thereby increasing spending in 2020 and less delayed work pushed out into 2021, lowering 2021 spending slightly. This shifts the balance of spending and now shows a small spending growth in 2020 and only a slight increase in 2021.

Non-building Infrastructure spending is up 8% year-to-date through May. Nonresidential Buildings is level year-to-date. Residential spending ytd is up 9%.

On April 1, the pre-pandemic forecast for 2020 spending was up 6% over 2019. The revised forecast is now up only 2.9%, based on the spending data for Mar-Apr-May released on 7-1-20. The biggest change contributing to the decrease is in residential work. Non-building Infrastructure work, particularly Power and Highway, continues to support spending the next two years.

These markets remained at level spending or posted gains in spending in April and May: Public Safety, Amusement/Recreation, Transportation, Communication, Highway/Street, Public Works. The largest declines in spending were in Residential, Lodging, Healthcare, Power and Manufacturing.

The result of lesser impact from fewer work shut downs in Apr-May is a better overall forecast for 2020 and a reduction of delayed work pushed into 2021. However, the forecast for 2020 may possibly get a bit worse with expected revisions. I was predicting shut downs of 10% to 15% and in some markets 25% and that did not show up in the Census spending report. But the uncertainty of what the fall brings still weighs heavy on any outlook. Still in question is whether some states may yet need to invoke temporary shut downs that were originally expected to occur in Apr-May.

After three months, there are still approximately 400,000 jobs lost without an equivalent decline in spending. Even with some future downward revisions to spending, my thoughts are we could expect many of these jobs lost for good. But this most recent data produced at least some of the correction I expected last month. The plot below of the number of jobs to put-in-place $1 billion of volume spiked downward in April by an unrealistic amount. With the most recent May-June data, spending dropped a bit more and jobs increased. This corrected the downward spike almost back up to where it was.  Spending is still subject to several revisions for a year. Don’t be surprised to see this plot move slightly higher in the near future. A higher value on this plot represents lower productivity. I would expect current conditions to result in lower productivity and eventually that should show up on this plot.

My forecast updated to 7-2-20 shows spending increasing through the remainder of 2020 with almost all of the change due to restarting work that was shut down. But then as we turn into 2021, spending begins to fall slightly again through mid-year, with the emphasis on change due to loss of spending from a decrease in new starts in 2020. Still unknown, with no way to tell from the data, is how many of the projects that shut down will not restart? Also unknown is the impact of cancellations of starts for new capital investment.

Residential work posted the largest drop in spending so far, down almost 10% in three months. But even with that steep drop, residential spending is still up 9% year-to-date compared to 2019. Residential and Nonresidential Buildings posted large reductions in new starts in April and May. That will have an impact on 2021 spending. Only Non-building infrastructure is forecast to post sizable spending gains in 2020 and 2021.