This is clearly going to measure up as the breakout year for spending on nonresidential buildings.  Growth year-to-date (YTD) is up 18.3%.  We will finish the year with total growth up 17%.  The last time we saw growth like this was 2007.  In fact, 2007 is the only time % growth (and $ volume growth) was ever larger than this year.

Since last December I have been predicting a range from 14% to 20% growth in 2015 nonresidential buildings spending. It looks like we will finish the year right in the middle of that range.

Nonresidential buildings spending will maintain greater than 10% growth in 2016 something achieved only 5 times in 25 years. Next year, educational and healthcare buildings will both contribute strongly to the total annual growth.  Manufacturing, Office and Lodging will all settle back but still maintain 10% or greater growth.  Commercial-retail, which had 3 years of substantial growth from 2012 to 2014 adding nearly 50% spending growth during that time, will grow only 2-3% next year.

With last year, this year and next, nonresidential buildings spending will reach growth of 40% in three years, a growth rate exceeded only once in history, during the last construction boom from  2006 to 2008. Along with that boom in spending came the highest construction inflation ever recorded, an average inflation over 8% per year for 4 years.  I expect we are headed there again. 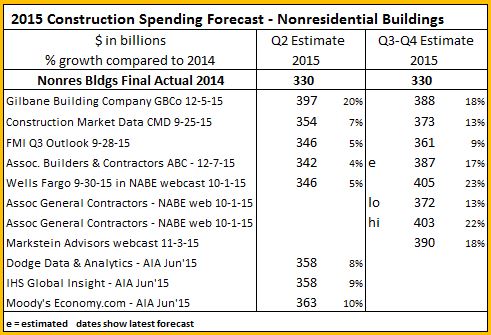