Throughout the year a number of firms provide forecasts of construction spending. Spending projections give us an indication of the level of activity to expect. Here’s a summary of the most recent forecasts. 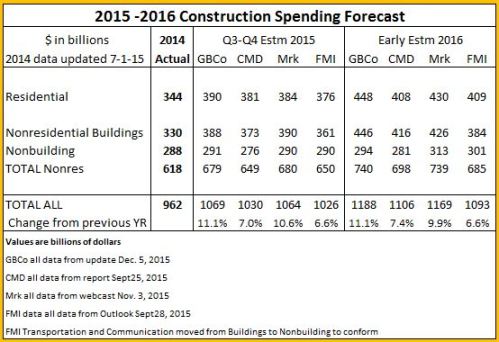 Actual spending put-in-place for October year-to-date (YTD) became available December 1st and new construction starts for October became available November 23rd. My GBCo 12-5-15 forecast includes both of those data updates.  Not all these firms have yet incorporated the October data into their analysis and some will update in the near future. Most all of these values will be updated in January. Also, the AIA semi-annual Consensus report, forecasts of nonresidential  buildings only, will come out in January. Again I’ll point out, my numbers have not changed much since July when I predicted $1067 for total, $388 for residential and $397 for nonres bldgs spending in 2015. Click on this link to an older post that shows the midyear predictions for three firms.

Once spending data through September is available it allows an analysis of a select data set that gives a prediction of the year end result within +/- 1%. I use this analysis to check my forecast.  It indicates 2015 should finish with total spending between $1.067 trillion and $1.087 trillion and nonresidential buildings spending between $386 billion and $395 billion. The actual spending total has not fallen outside the statistical range since 2001, as far back as I’ve been tracking the data. I’m confident that total spending for the year will fall within this predicted range.  My 2015 forecast of $1.067 trillion total and $397 billion for nonresidential buildings falls within those ranges.

What we do know is that most starts that will generate spending next year are already in place. For the 2016 forecast, new starts booked through December 2015 will contribute 75% to nonresidential buildings spending, 55% to residential spending and 80% to spending on nonbuilding infrastructure.  The pattern of spending will not be a constant upward slope.

This table compares all 2015 values to the final of $330 billion in 2014.  For 2016 each firm is compared to their own 2015 value. Once an actual value is determined for 2015 (which won’t be until March 1, 2016) I cannot be certain if some other firms forecast dollars change or percent floats.  In the Gilbane forecast, 2016 percent would float. This will also affect the 2016 values in the first table in this blog post.