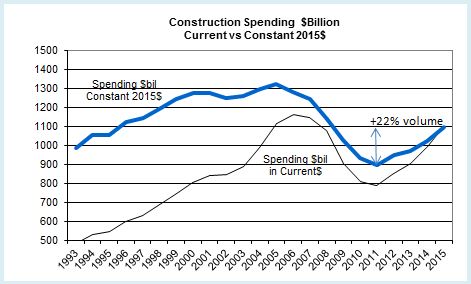 Now it looks like over 5 years jobs seem to be growing nearly the same as construction volume.  It even looks like productivity increased, but that’s still not the whole picture.

Real work output growth is total jobs adjusted by the hours worked each year. From 2011 to 2015 construction hours worked increased by 3.6% from near the lowest on record to the highest ever recorded.  The reason this has such a huge effect is hours worked gets applied on all 6.5 million jobs, not just the new jobs added. So, a workforce that grew by 20% worked 3.6% longer hours showing that net total work output actually increased 24.3%.

It is not uncommon at all that productivity declines during rapid growth.  This pattern of growth appears prominently in the last two expansions between 1996 and 2006. Firms may be increasing staff based on revenue without strict attention to real volume growth, only to then slow jobs growth and allow volume production to catch up.

By measuring to previous productivity levels, we could say the construction workforce is currently overstaffed. Of course, spending (and net volume after inflation) is expanding rapidly and with it so must the workforce. But, if there is any hope that eventually productivity will return to previous levels, then we must hope for a minimum increase of 2%+ in volume with no matching additional increase in new jobs or hours worked.

Over the next two years I predict construction spending will increase close to 20%, BUT construction volume will increase only 10%, most of that in 2017. In a previous post, “How Many Construction Jobs Will Be Needed” I predicted jobs will grow by 500,000 to 600,000, only about 8%.

Filling positions with workers less qualified than those who were lost accounts for some of the decline in productivity. Working longer hours also leads to productivity loss. To regain lost productivity, new workers need to gain experience AND overall hours need to be reduced and that workload replaced with new jobs. That’s certainly not likely to happen all in one year, but it may account for some of the reason why volume is currently growing faster than jobs, and that’s a good thing. I expect that will continue at least for the next two years.