Click Here for Link to a 20year Table of 25 Indices

The following plots are all the same data. Different time spans are presented for ease of use. 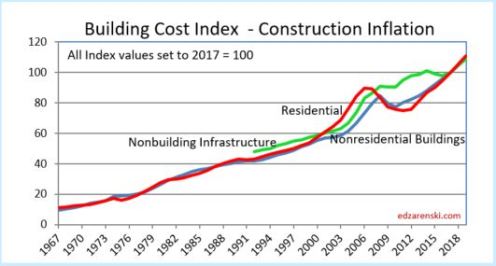 Producer Price Index (PPI) Material Inputs (excluding labor) costs to new construction increased +4% in 2018 after a downward trend from +5% in 2011 led to decreased cost of -3% in 2015, the only negative cost for inputs in the past 20 years. Input costs to nonresidential structures in 2017+2018 average +4.2%, the highest in seven years. Infrastructure cost are up near 5% and single-family residential inputs are up 4%. But material inputs accounts for only a portion of the final cost of constructed buildings.

Labor input is currently experiencing cost increases. When there is a shortage of labor, contractors may pay a premium to keep their workers. All of that premium may not be picked up in wage reports. Also, some of the labor inflation is due to lost productivity due to less skilled workforce. Unemployment in construction is the lowest on record. There is some sign of jobs growth slowing down in Q2 and Q3 2019, and potentially getting slower.

Click Here for Link to a Table of 25 Index Values

ENRBCI and RSMeans input indices are prefect examples of commonly used indices that DO NOT represent whole building costs, yet are widely used to adjust project costs. An estimator can get into trouble adjusting project costs if not using appropriate indices. The two input indices for nonresidential buildings did not decline during the 2008-2010 recession. All other final cost indices dropped 6% to 10%. 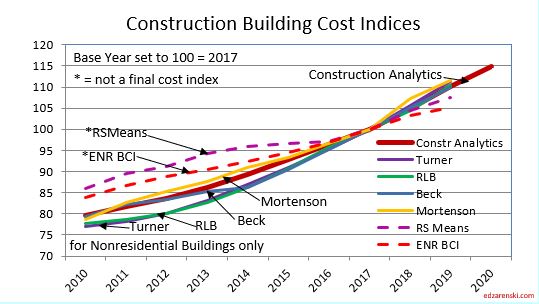 CPI, the Consumer Price Index, tracks changes in the prices paid by urban consumers for a representative basket of goods and services, including food, transportation, medical care, apparel, recreation, housing. This index in not related at all to construction and should never be used to adjust construction pricing. Historically, Construction Inflation is about double the CPI. However for the last 5 years it averages 3x the CPI.

Taking into account the current (Jan 2018 12 mo) CPI of 2% and the most recent 5 years ratio, along with accelerated cost increases in labor and material inputs and the high level of activity in markets, I would consider the following forecasts for 2018 inflation as minimums with potential to see higher rates than forecast.

Nonresidential Buildings inflation, during the rapid growth period of five years from 2004-2008, averaged 8% per year. Inflation averaged near 4% per year for the 4 years 2014-2017.

Several Nonresidential Buildings Final Cost Indices averaged over 5% per year for the  last 2 years and over 4% per year for the last 5 years. Nonresidential buildings inflation totaled 22% in the last five years. Input indices that do not track whole building cost would indicate inflation for those four years at only 12%, much less than real final cost growth. For a $100 million project escalated over those four years, that’s a difference of $8 million, potentially underestimating cost.

Nonresidential buildings spending slowed from 2017 to 2019 but is now entering a phase in which it may reach the fastest rate of growth in three years, which historically leads to accelerated inflation. Construction inflation for nonresidential buildings for 2018 and 2019 was 5%/yr. For 2020 expect 4.25%, rather than the long term average of 3.5% to 4.0%.

Non-building infrastructure indices are so unique to the type of work that individual specific infrastructure indices must be used to adjust cost of work. The FHWA highway index increased 17% from 2010 to 2014, stayed flat from 2015-2017, then increased 6%+ in 2018. The Highway index for 2019 is up about 6%. The IHS Pipeline and LNG indices increased in 2018 but are still down 20% since 2014. Coal, gas, and wind power generation indices have gone up only 6% in seven years. Refineries and petrochemical facilities have dropped 5% in 4 years but 2018 regained the level of 2013. Input costs to infrastructure are down slightly from the post recession highs, but most have increased in the last year. Input cost to Highways are up 5.0% and to the Power sector are up 3.6% in 2018. Work in Transportation and Pipeline projects has increased dramatically in 2017 and 2018.

Infrastructure power indices registered 2.5% to 3.5% gains in 2017 and again in 2018. Highway indices increased 6.6% in 2018. Anticipate 4% inflation for Power sector and at least 5%-6% inflation for Highway in 2019 with the potential to go higher in rapidly expanding markets, such as pipeline or highway.

This plot for nonresidential buildings only shows bars representing the predicted range of inflation from various sources with the line showing the composite final cost inflation. Note that although 2015 and 2016 have a low end of predicted inflation of less than 1%, the actual inflation is following a pattern of growth above 4%. The low end of the predicted range is almost always established by input costs, while the upper end of the range and the actual cost are established by selling price indices.

A word about terminology: Inflation vs Escalation. These two words, Inflation and Escalation, both refer to the change in cost over time. However escalation is the term most often used in a construction cost estimate to represent anticipated future change, while more often the record of past cost changes is referred to as inflation. Keep it simple in discussions. No need to argue over the terminology, although this graphic might represent how most owners and estimators reference these two terms. 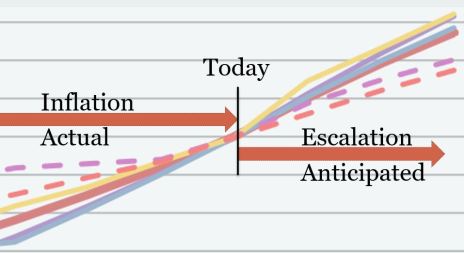 In every estimate it is always important to carry the proper value for cost inflation. Whether adjusting the cost of a recently built project to predict what it might cost to build a similar project in the near future or adding an escalation factor to the summary of an estimate for a project with a midpoint 2 years out, or answering a client question, “What will it cost if I delay my project start by one year?”, whether you carry the proper value for escalation can make or break your estimate.

Click Here for Link to a Table of 25 Index Values