Construction Starts for September were released 10-18-16 from Dodge Data and Analytics. Here’s some of the major points that can be developed from the data: 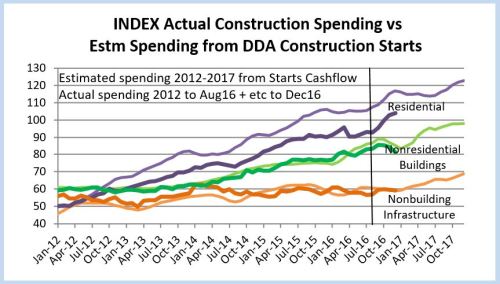 The six Nonresidential Buildings markets, Office (+30% YTD), Lodging (+50%), Educational (+10%), Healthcare (+20%), Commercial Retail (+15%) and Amusement/Recreation (+15%) make up 80% of all nonresidential buildings spending and account for combined growth of 16.5% in YTD new starts. Office and Lodging in 2016 will reach the 5th consecutive annual increase. Educational Markets, Commercial Retail and Amusement/Recreation will each record the 4th consecutive annual increase in total value of new starts. Spending combined for these six markets peaked in 2008 and dropped 37% to a bottom in 2012. For the last 3 years spending growth has ranged between 9%/yr and 12%/yr. For 2017, expect spending growth of 8%.

Manufacturing makes up 18% of nonresidential building market share. New starts 2016 YTD are down 54% from 2015. However, in 2014 and 2015 this market posted the fastest growth of any market in a decade and posted the two highest years on record for this market. It is currently settling back to a normal growth range. In 2014 starts increased 90%. In 2015 spending increased 33% to the highest ever recorded for manufacturing buildings. Spending will be down 2% to 3% in 2016 and down another 13% more in 2017, but 2017 will still be the 3rd highest year of spending on record.

Non-building Infrastructure starts will be down nearly 10% in 2016 but were up 25% in 2015. Power and Highway/Bridge/Street make up 2/3rds of non-building infrastructure spending. In 2015, Power starts increased 150% to an all-time high and Highway/Bridge/Street finished just shy of a 6-year high. It is not unexpected that starts in these markets will be down for 2016. The volume of monthly spending from projects started in 2014 and 2015 in this sector will contribute to spending for several years to come. Spending in 2017 will be the highest ever in this sector, up 7% from 2016.

Starts are recorded in full in the month a project starts but the total project budget gets spent over a long duration, so the effects on spending are spread over the next 2 to 3 years. Total starts are Up 10%/yr to 12%/yr for the last 4 years. The current forecast for 2016 is growth of only 3.5%, but that now leads us to a very important factor that must be considered when using starts data to predict future spending.

There is a major factor that keeps new starts in the current year from appearing as good as they should. Dodge Data continually revises starts. In every monthly release, the previous month is revised AND the last year’s year-to-date is revised. Dodge does incorporate other (usually minor) revisions at a later date, but the “12 month” revision to the previous year-to-date values captures a large part of all revisions.

So this September report includes revisions to the total 2015 YTD values through September 2015. None of the 2016 values yet include that equivalent “12 month” revision and won’t until next year. But the current year YTD not-yet-revised values are being compared to the previous year YTD revised values which has the affect of making current year growth appear lower than it should.

In the last 10 years the YTD revisions have never been down. Usually, most of the revisions occur to nonresidential buildings, about 5% to 6% per year, with only a 2% to 3% revision each to infrastructure and residential.

(Year-to-date by market and month/month values by market are not published.)