Home » Behind the Headlines » Construction Jobs – Behind The Headlines

Construction Jobs – Behind The Headlines

Headline comparisons we read are often what happened this month versus last month or year-to-date versus last year. For comparisons to construction spending and jobs it is perhaps beneficial to look at recent and longer term trends. Here I will discuss construction jobs growth versus spending growth and highlight some of the pitfalls when comparing these values for productivity.

The most talked about reason for slower jobs growth is the lack of experienced workers available to hire.  In fact, recent surveys indicate about 70% of construction firms report difficulty finding experienced workers to fill vacant positions.  That certainly cannot be overlooked as one reason for slower jobs growth, but that is not the only reason?

Even with all this talk of difficulty finding experienced construction workers, there has been very good jobs growth. For the 5 ½ year period from the bottom in January 2011 to the present (August 2016) we added 1,240,000 construction jobs.

Jobs growth from October 2015 through March 2016 was exceptional, 214,000 construction jobs added in 6 months, topping off the fastest 2 years of jobs growth in 10 years. That is the highest 6-month average growth rate in 10 years. That certainly doesn’t make it seem like there is a labor shortage. However, it is important to note, the jobs opening rate (JOLTS) is the highest it’s been in many years and that is a signal of difficulty in filling open positions.

I would expect growth like that to be followed by a slowdown in hiring as firms try to reach a jobs/workload balance, after such a robust period of jobs growth. It appears we may have experienced that slowdown. Jobs have been down four of the last six months and up most recently.

It is not so unusual to see jobs growth slowed in the 2nd quarter. It follows directly with the Q2 trend in spending and it follows what might be considered a saturation period in jobs growth. The last two years of jobs growth was the best two-year period in 10 years. It might also be indicating that after a robust 6 month hiring period there are far fewer skilled workers still available for hire. The unemployed available for hire is the lowest in 16 years.

Although spending slowed in the 2nd quarter this year, in part it’s because the 1st quarter was so strong. They combined for a strong 1st half up 7.2% over last year.

So, it looks like volume (+28%) still increased much more than jobs (+23%) in the same period and this would indicate increasing productivity. But this still is not the whole picture. Jobs need to be adjusted.

Before the dramatic decline in jobs from 2007 through 2010, hours worked ranged between 37hrs/wk and 38hrs/wk. But by 2015, and into 2016, hours worked has been consistently over 39hrs/wk. So not only did the workforce grow by 1.24 million jobs (+23%), but also the entire 7.0 million work force is working about 4% more hours/week. This must be considered to get net jobs, or work output.

Since Jan 2011, volume increased 28% and workforce output increased 28%, for a net productivity balance, but in 2011 we had a significant productivity loss and a smaller loss in 2013. The huge 2011 productivity loss is probably in part explained by the resumption of hiring after historic job cuts, particularly in 2009 when the work force was cut 16% but, while spending declined by 16%, work volume declined only 11%, which may have overshot the balance mark. That helps account for the huge productivity gain in 2009, but also leads to the losses in 2010 and 2011.

From Jan 2014 to Dec 2015 volume increased by 15% and workforce output increased by only 10.5%. Total hours worked compared to total constant value of spending shows productivity increased for those two years. Historically, we should not expect to see productivity growth continue for a third year and as of August it is down year-to-date. 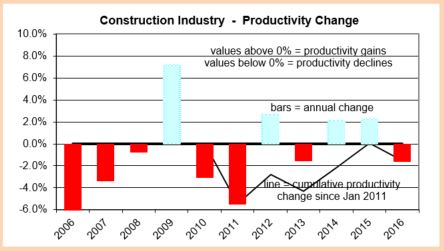 I expected to see a turn-around in jobs growth in the 2nd half of 2016, and so far, for the 3-month period July-Sept we’ve added 34,000 jobs. That’s starting out perhaps a little slower than I thought. For much of 2014 and 2015 volume growth was exceeding jobs growth, but for 10 months from August 2015 through May 2016, volume growth mostly stalled and jobs growth, which just had 6 months of record high growth, exceeded volume growth by 3%. Only in the last few months has volume growth begun to outpace jobs growth again. But I suspect it is this slow down in real volume growth that has led to slow jobs growth. This leads me to think if spending plays out as expected into year end 2016, then construction jobs may begin to grow faster in late 2016. However, availability could have a significant impact on this needed growth.

Availability already seems to be having an effect on wages. Construction wages are up 2.6% year/year, but are up 1.2% in the last quarter, so the rate of wage growth has recently accelerated. The most recent JOLTS report shows we’ve been near and now above 200,000 job openings for months. With this latest jobs report, that could indicate labor cost will continue to rise rapidly.

As wages accelerate, also important is work scheduling capacity which is affected by the number of workers on hand to get the job done. Inability to secure sufficient workforce could impact project duration and cost and adds to risk, all inflationary. That could potentially impose a limit on spending growth. It will definitely have an upward effect on construction inflation this year.