Construction spending is not the only factor for business growth planning. The adjustment for Inflation is the most important factor.

If your company revenues are increasing at a rate of 7% per year at a time when construction inflation is 5%, your business volume is increasing only 2% per year. If you do not factor inflation into your growth projections, you are not forecasting growth properly. Spending is revenue. Volume is spending minus inflation. 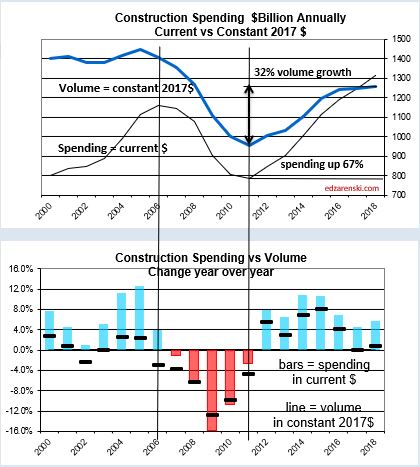 Look at the data to the left of the vertical line through 2006. Notice in the bottom plot in the years 2004 and 2005 there is very high spending but very low volume. In 2006 spending was up 4% but real volume declined 3%. For those three years inflation totaled nearly 30%. On the top plot you can see the cumulative effect of several years of high inflation. From 2000 to 2006 spending increased 45% but volume barely moved at all. During this period jobs increased by about 15% and even that outpaced volume. Businesses watched as spending increased 45% in seven years. They increased staff by 15%, but real volume was flat. Heading into the recession construction dollars on the books had been increasing for years but volume was stagnant and companies were top-heavy with jobs.

Addressing the current period 2011 through 2018, if you base business growth on your annual revenue growth, or spending, rather than using inflation adjusted dollars, your forecast for business growth over this eight year time period would be more than double actual volume growth.