The construction spending forecast for 2020 indicates 2% growth. But predicted 2020 construction inflation is slightly higher than 4%. So, real construction volume in 2020 decreases by 2%. Jobs should follow volume growth, yet history shows that in non-recessionary periods, even with volume declining, jobs usually continue to increase, but perhaps at a slower rate.

Simply stated, there has not been any volume growth in the last two years to support jobs growth. In constant $, there was no volume growth in any sector in 2018. In 2019 and 2020, only Non-building Infrastructure shows growth, 2%-3%/yr.

This plot shows predicted 2020 jobs growth of 1.5% or just over 100,000 jobs. Since volume is forecast to decline, any jobs growth in 2020 will increase the disparity between jobs and volume growth. The disparity has been increasing since early 2018. It’s a 15% difference right now. Within a year that could be 20%. 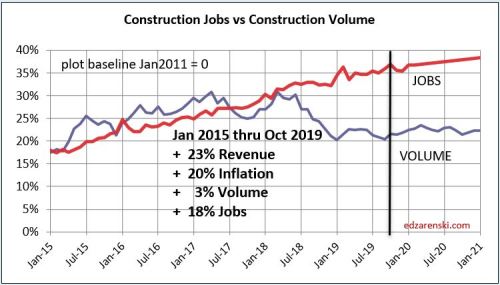 To emphasize the growing difference, look at these two plots, actually, the same plot just modified to account for the 15% bust in 2006. 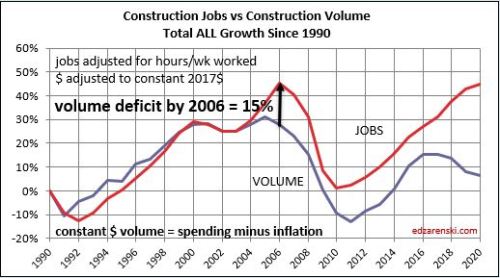 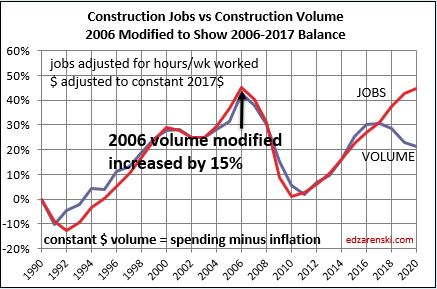 Construction jobs growth slowed substantially the last two quarters. I  predicted jobs growth would slow because volume growth had already been declining since early 2018 when volume reached a peak of $1,300 billion. Volume is now $1,170 billion, down 10% in 20 months.  After 6 years of jobs increasing at an average 275,000/year, jobs are up only about +150,000 in the last year, but only +48,000 in the last 7 months. The rate of jobs growth is now the slowest in 7 years. I expect this trend to continue.

The plot of jobs growth below shows current growth rate is below an annual rate of 150,000 jobs/year and it is expected to remain there through 2020, potentially dipping as low as 100,000.

I’d be surprised if jobs start to decline, but that certainly could be envisioned and it would help explain away some of the disparity in growth shown on the Jobs/Volume plot up above.

By edzarenski in Behind the Headlines, Forecast, Jobs on December 6, 2019.
← Advancing Construction Presentation 12-3-19 2020 Construction Spending Increases, but Volume is Down →