2-1-17 Upated to include Decmber data

In 2017, Non-building Infrastructure, following two down years, will increase by 4.4% to $304 billion, due to growth in the highway and transportation markets. In the most recent quarter spending began to recover from 2016 lows posted in August and September. 2017 will be a record year for Infrastructure spending supported by spending generated from the Fixing America’s Surface Transportation Act and potentially the Water Resources Development Act.

Annual percent growth in new starts (backlog), by itself, is not necessarily a good indicator of spending in the following year. The duration of backlog must be known to forecast spending.

At the beginning of 2016, work in backlog had increased 9% over 2015, but because a large percentage was very long duration work, the amount of cash flow (work put-in-place) in 2016 from that backlog decreased from 2015.

At the beginning of 2017, work in backlog increased only 6% over 2016. What is significant though is that the amount of cash flow in 2017 from that backlog will be up 10%. That is being caused by long duration work-to-complete backlog from 2014 and 2015, which is dominated by spending in the power market. In the 1st five months of 2015, a years worth of Power work started and it’s not yet completed. It’s still contributing to infrastructure spending in 2017.

Infrastructure construction starts and spending is dominated by movements in Power and Highway markets. Power/Electric/Gas and Highway/Bridge/Street, about equally, comprise 65% of all infrastructure spending. Transportation/Air/Rail accounts for 15%. Sewage/Waste 8%, Communication 6%, Water 4% and Conservation 3%.

Transportation hit all-time highs in spending all during the 2nd half of 2015. Spending declined by 6% in 2016 but is still the second highest year on record. It will again equal those 2015 highs throughout all of 2017. Transportation spending in 2017 will grow 6% over 2016. 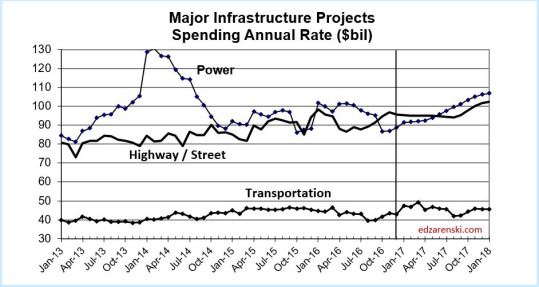